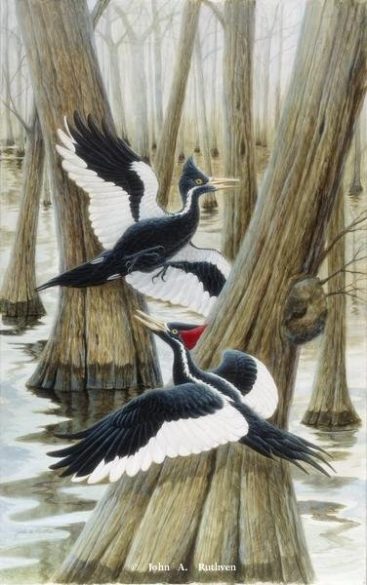 The early explorers in this country saw this fascinating bird and it impressed all that saw it. The Ivory-billed Woodpecker has a wingspan of 2-1/2 feet and measures 21″ from bill to tail. The male has a flaming red crest, and extremely beautiful iridescent white and black plumage. It was a site to behold!

John James Audubon nicknamed it the Vandyke bird after the famous Flemish painter because he used similar colors in his paintings. Alexander Wilson, one of our first major bird artists in this country, was fascinated with the bird and even had one as a pet. One day he left the bird alone in his bedroom tied to the bedpost and it subsequently escaped and was loose in the room. Much to his chagrin, he returned to his room where he found the woodpecker pecking holes trying to escape.

This bird inhabited the unbroken Tupelo and Cypress swamps of the great southeastern part of the United States. Never being really abundant, it was however, the king of the woods. The Indians also revered it, decorated their costumes with its plumage and it`s outstanding ivory bill was something for the chiefs to wear. 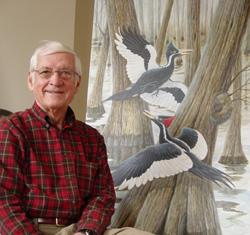 My association with the birds has been long standing. I have created two major paintings, one was reproduced in Aquatint and the most recent was the result of being on the recovery team whose efforts resulted in finding an existing bird in the practically non-existent habitat. I say that because most of the timber was logged off early in the 20th century resulting in the bird being declared extinct.

Not until this outstanding siting of one male living woodpecker was there anything like this event in the natural world. Being associated with such a project is something that I will never forget.

Creating the painting after being asked to be on the recovery team was very rewarding. I was invited to Washington D.C. for a formal unveiling with the Secretary of the Interior, Gail Norton.

A limited edition signed and numbered giclee` print has been produced, and is available through John A. Ruthven and Wildlife Interntionale, Inc. by calling 800-892-3586 or www.ruthven.com.

John has also traveled to the Florida panhandle numerous times where the Ivory-billed Woodpecker has been seen. His search continues in hopes of seeing “Elvis” and taking a photo.